Spiders Around My House

It has been a bad year for lots of spiders around my house, both inside and outside, in the garden, on the deck, everywhere.  These bigger ones are on the deck and garden plants.  I looked this type up and found out their bite can make you quite sick for days and here I am poking them with my finger. 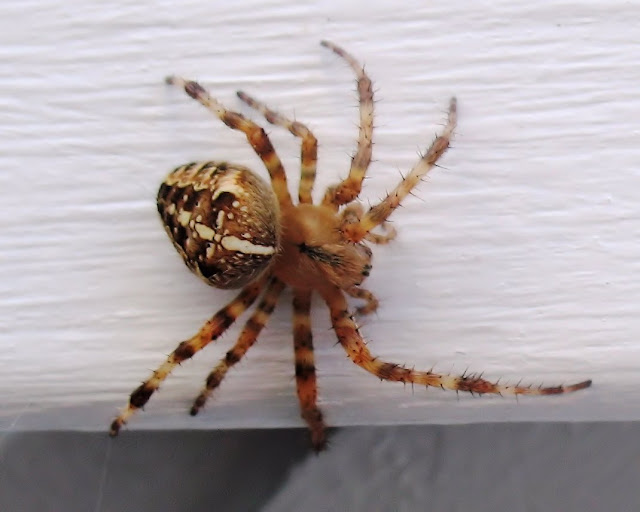 When I started to take these pictures, this female spider ran up her web to the top of the deck railing.  Normally they hang upside down on their web. 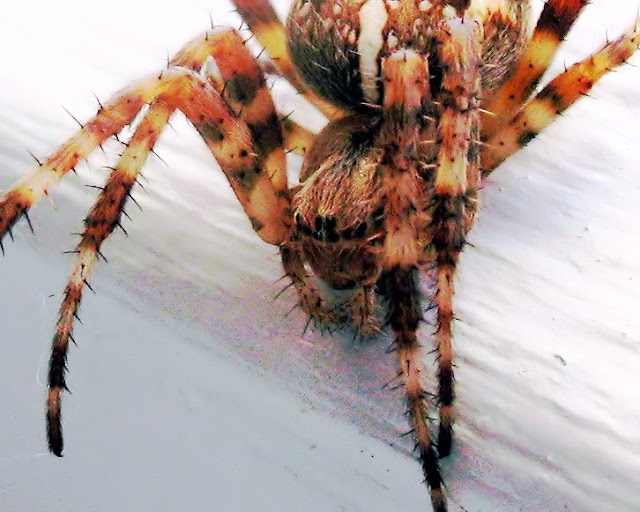 A face only a mother could love.  She had her round web between my barbecue and the railing. 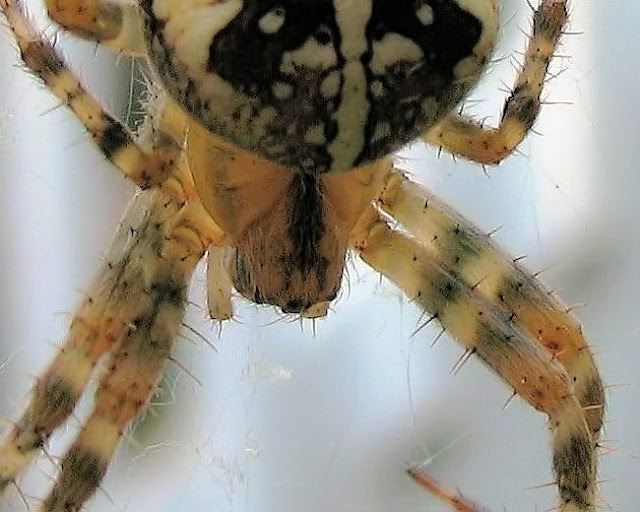 This picture was taken when she was still on her web.  I read on the internet that the dots on the underside of the abdomen form a cross and there it is. 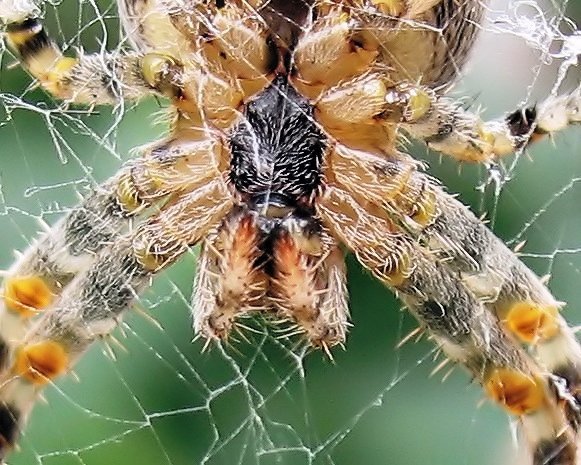 Same type of spider but this one was on a web covered in aphids.  It was between a Korean Lilac bush and a fence in my yard.  This lady was in the middle of her web upside down just like the book said. 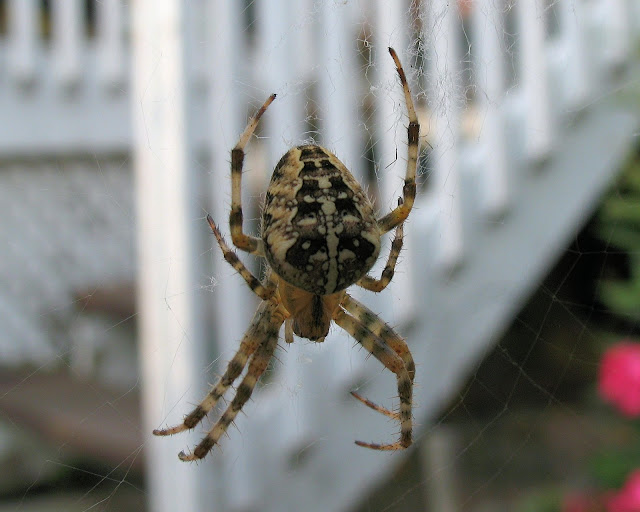 Same one from the other side of the fence.  This type of spider originated in Europe but has been in this country for a long time now.  The spiders don't bother me, the webs drive me crazy as they get in your face, hair, arms and clothing.  Every time you go out on the porch or deck in the morning, the webs are stretched from one end to the other.  Those webs are from a different type of spider, not the ones in these pictures. 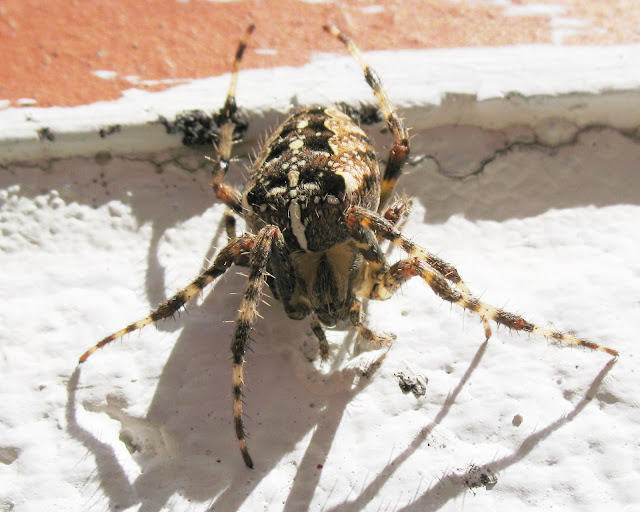 I found this picture I had taken September 2013.  Same type of spider.  Must be a relative of this years pictures.

Posted by James Gabrielson (Grampy) at Sunday, September 20, 2015 No comments:

Email ThisBlogThis!Share to TwitterShare to FacebookShare to Pinterest
Labels: spiders 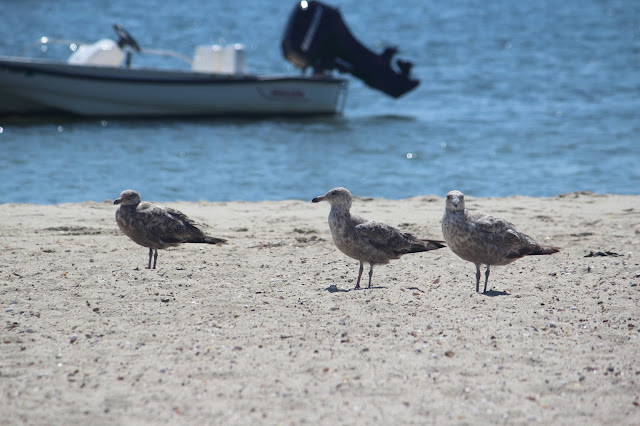 This picture of three Herring Gulls was taken July 3rd, 2015 by the ocean in a town called Hyannis (Cape Cod).  My wife and I were sitting on a bench at the edge of the beach where we stopped to see the John F. Kennedy Memorial.
Posted by James Gabrielson (Grampy) at Sunday, July 05, 2015 No comments: 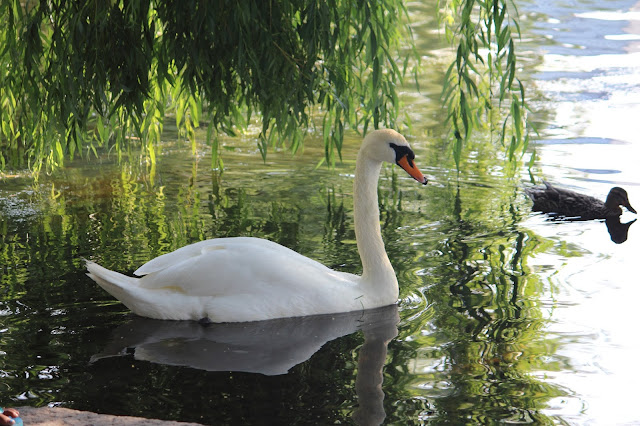 I took this picture July 3rd, 2015 in a pond at the Boston Public Garden which is across from the Boston Common.
Posted by James Gabrielson (Grampy) at Sunday, July 05, 2015 1 comment: 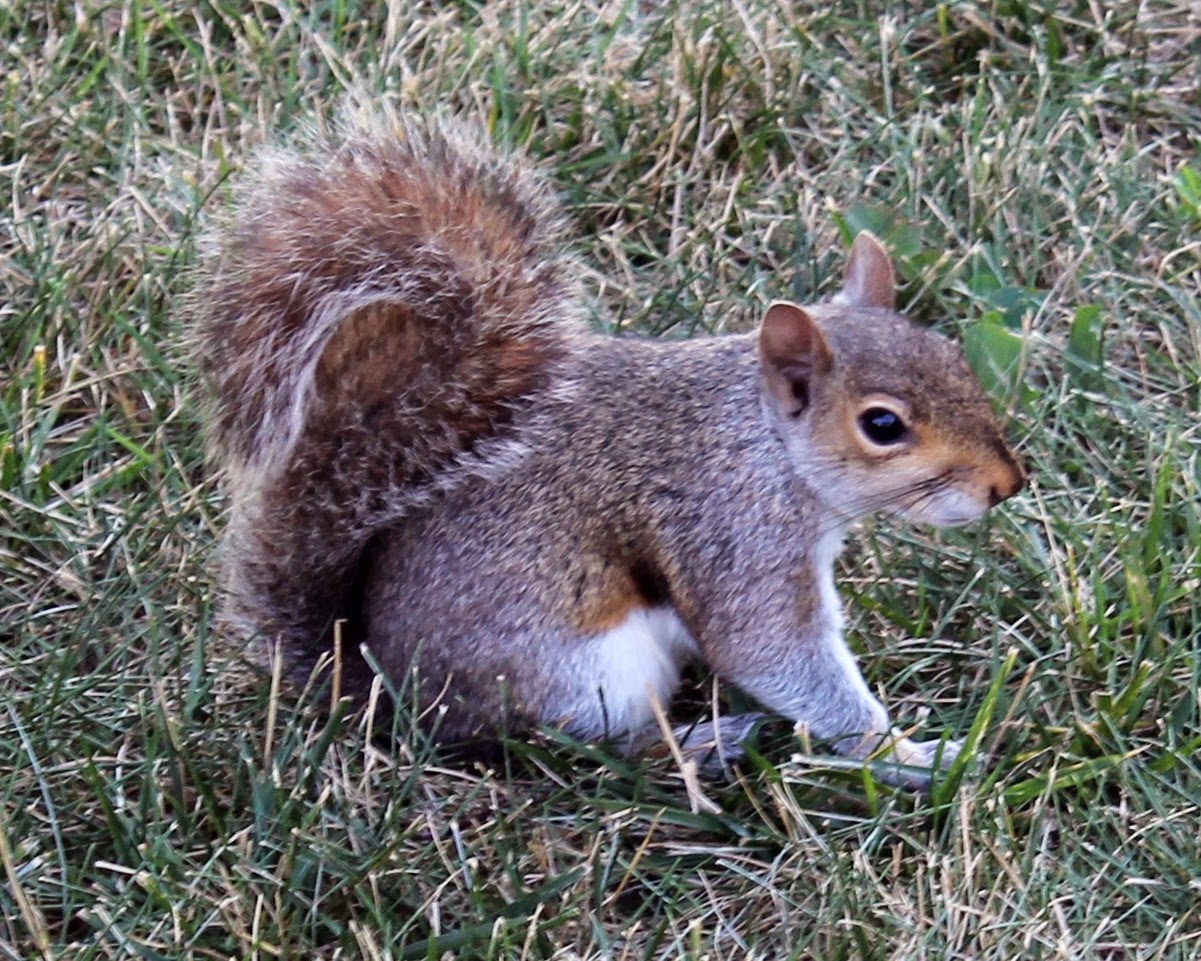 I took this photo of this little squirrel while walking in downtown Washington DC.  There was a lot of them and were not too worried around people.  All the squirrels seem to be the same colour there unlike Toronto squirrels that are all kinds of colours.

Posted by James Gabrielson (Grampy) at Monday, March 30, 2015 No comments:

Email ThisBlogThis!Share to TwitterShare to FacebookShare to Pinterest
Labels: Squirrel

Bird (type unknown by me) 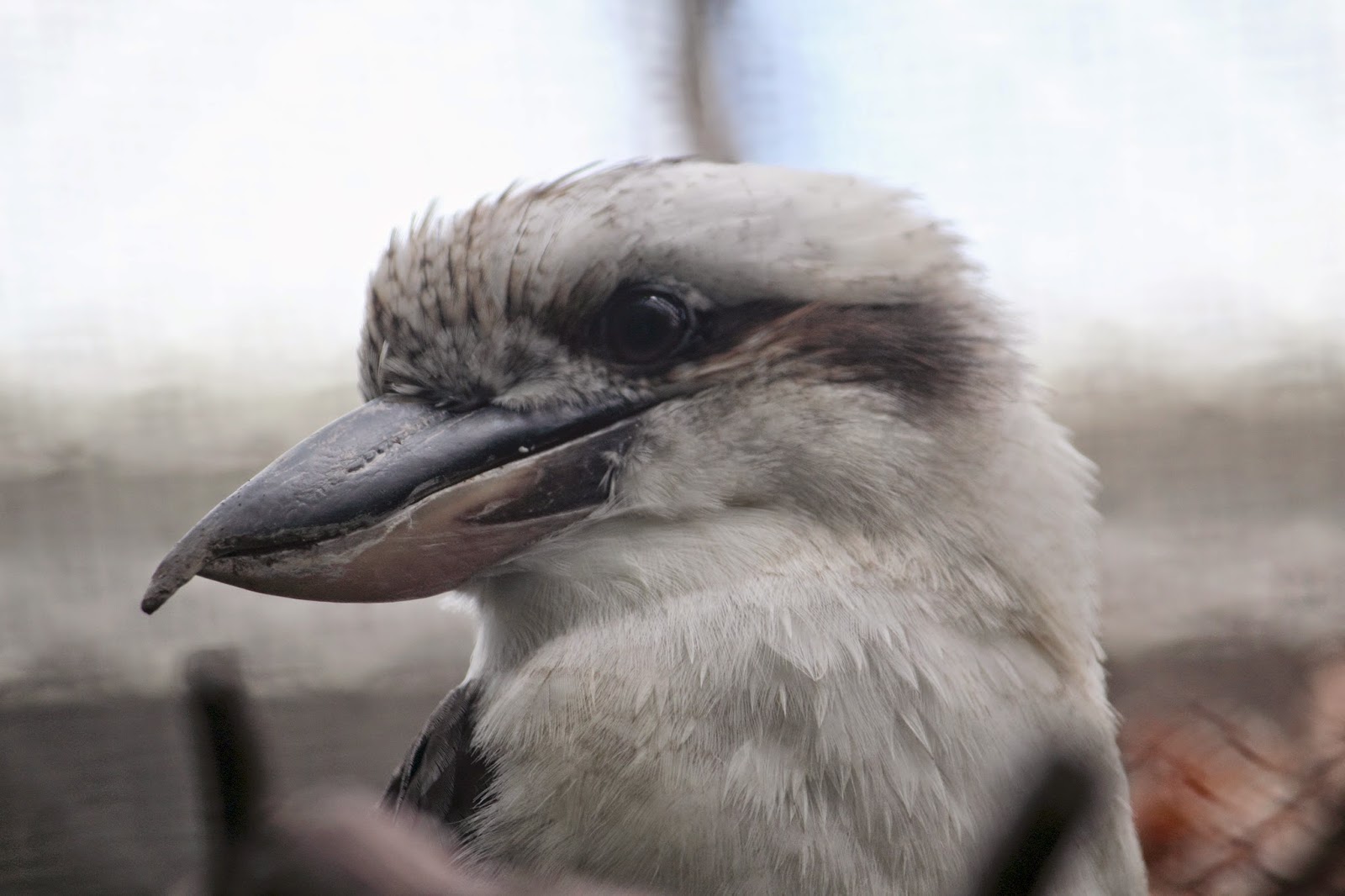 When I took this photo, I did not record what it was.  I guess I have to search the internet to see if I can find it. If you know what it is, let me know.
Posted by James Gabrielson (Grampy) at Monday, March 30, 2015 1 comment:

Email ThisBlogThis!Share to TwitterShare to FacebookShare to Pinterest
Labels: Birds 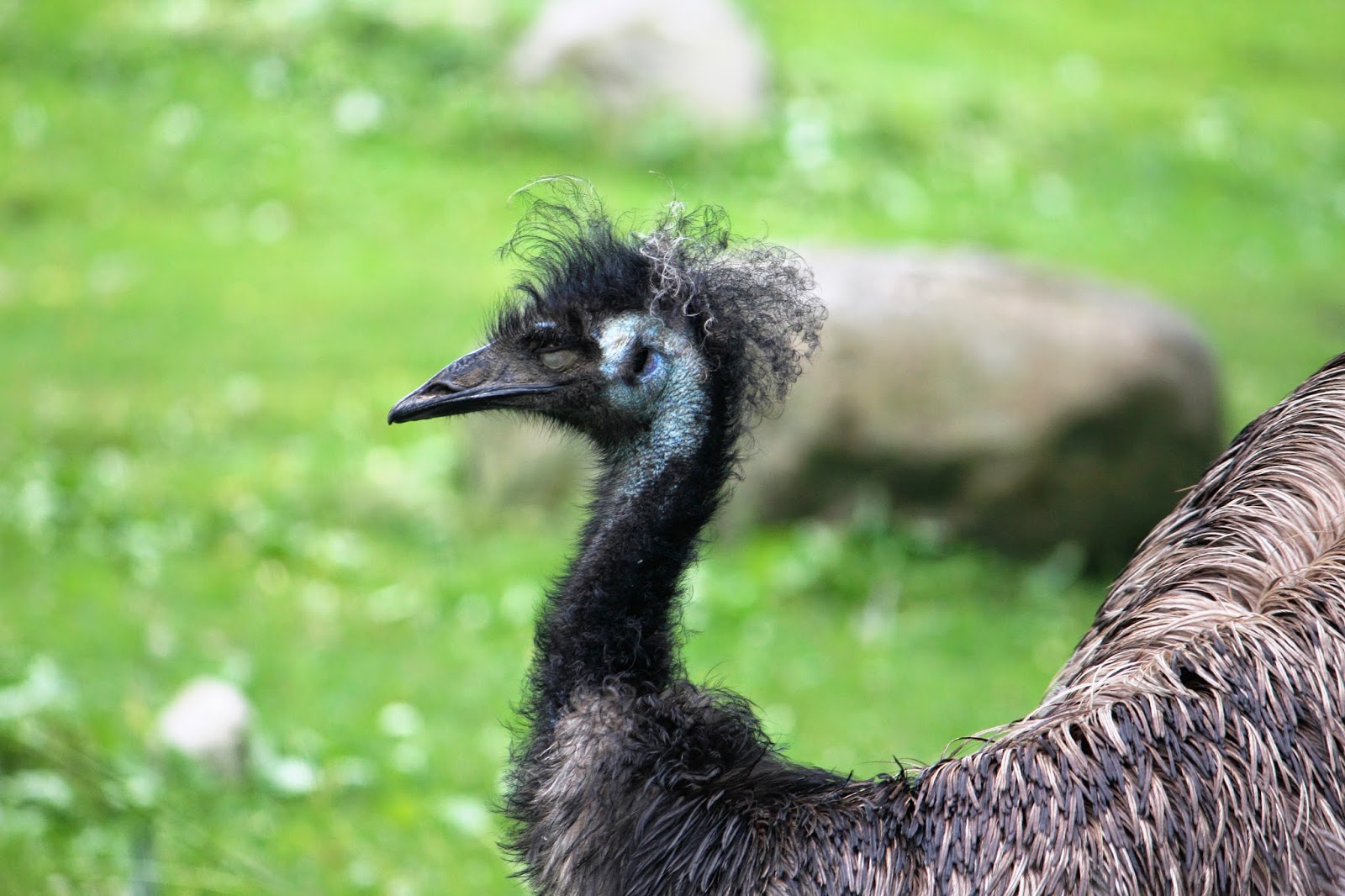 Looks like this bird is having a bad hair day. When I took the picture, I didn't see what kind of bird it is.  I did not find out what this bird is called.

Posted by James Gabrielson (Grampy) at Monday, March 30, 2015 No comments:

Email ThisBlogThis!Share to TwitterShare to FacebookShare to Pinterest
Labels: Birds 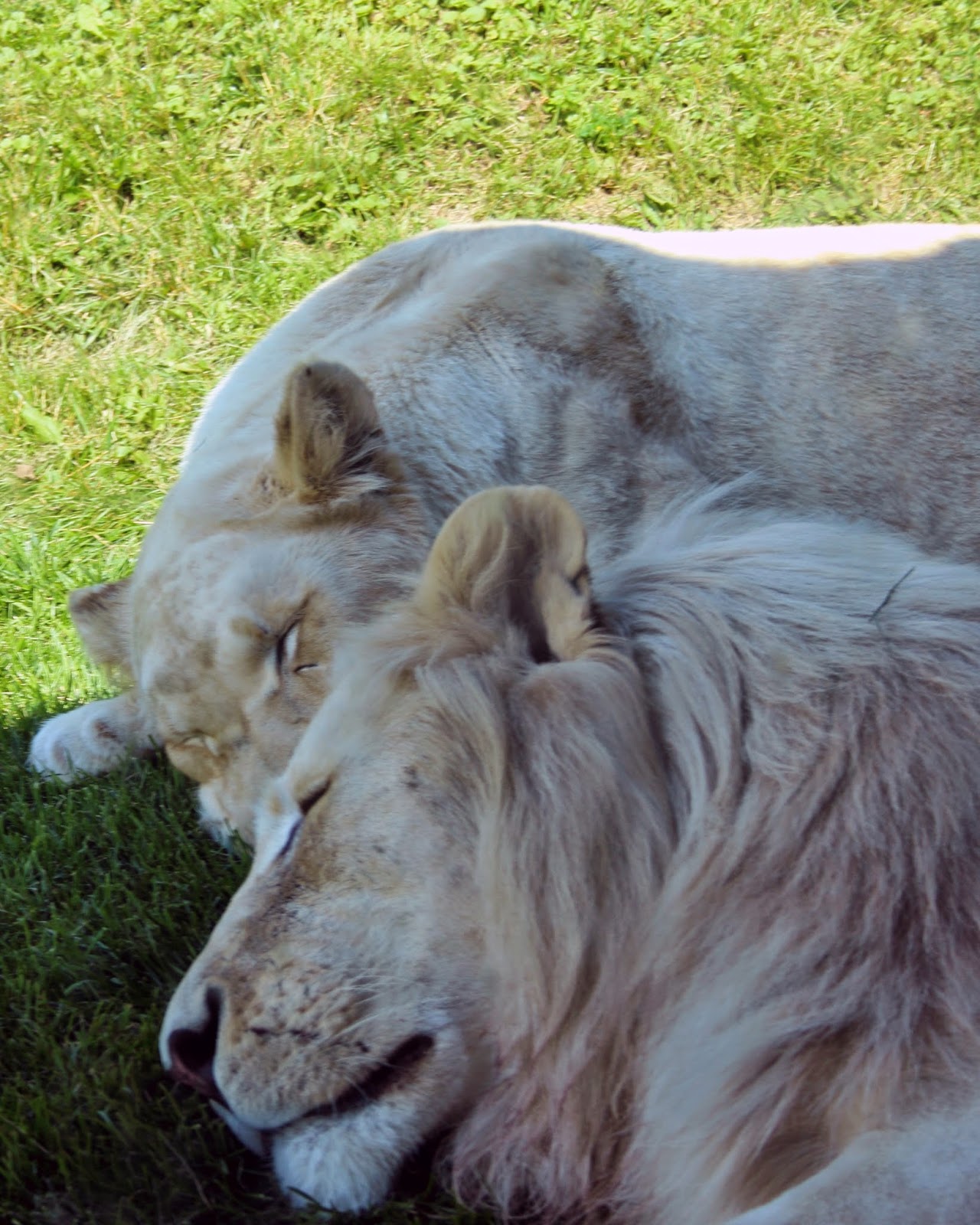 Not many animals were out walking around as it was very hot the day I took this picture and these two white lions were resting in what little shade they could find.  Photo taken the summer of 2014.
Posted by James Gabrielson (Grampy) at Monday, March 30, 2015 No comments: 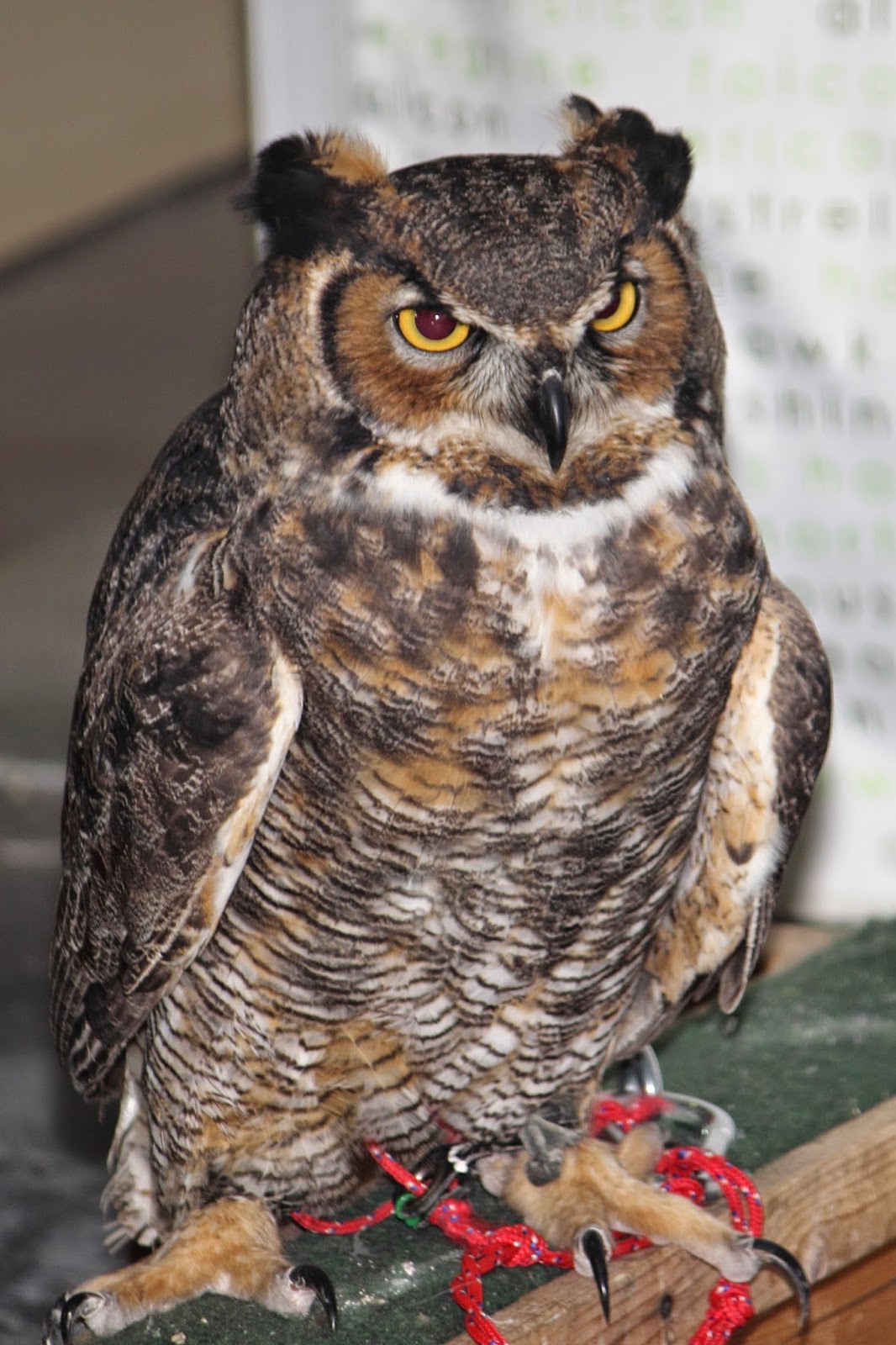 This Owl looked to be about 18 inches or so tall.  The birds were tethered to a perch at Wizard World at a Falcon display. 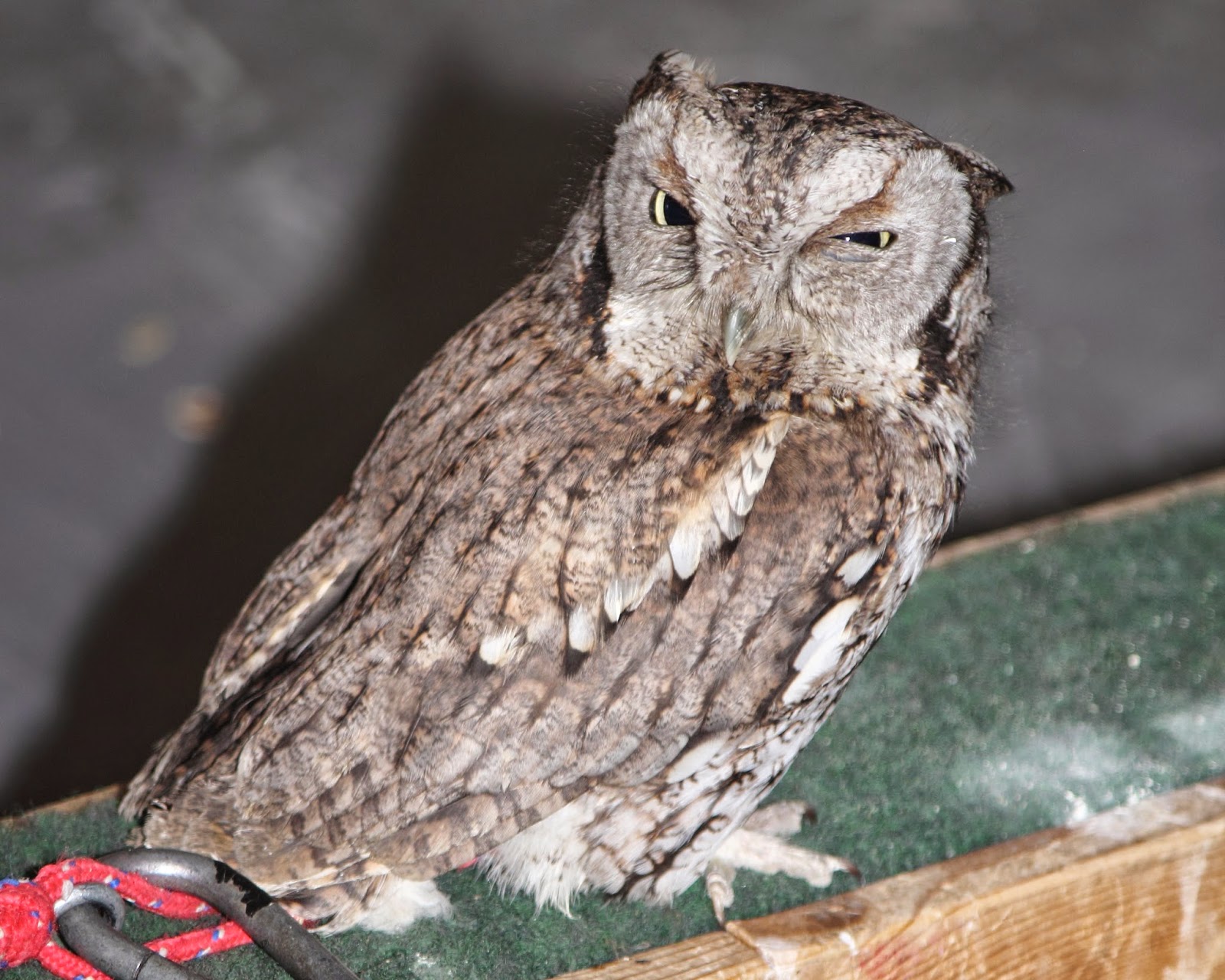 This little Owl wasn't much bigger than a Pigeon as you can see by the size of the clasp holding the bird.

Posted by James Gabrielson (Grampy) at Monday, March 23, 2015 No comments: